Situated near the entrance of the Castle, this aparment is located in a typical alley of this area. It has a living room with dining area, 3 bedrooms that can accommodate up to 6 people, a fully equipped kitchen, a bathroom and a pleasant terrace. It has wireless internet and TV.

The oldest presence of the human presence in this zone dates back to the Iron Age and passed through Phoenicians, Greeks and Carthaginians, Goths, Visigoths and Romans, eventually falling into the hands of Muslims in sec. VII, denominating Al-Ushnuna or Lissabona. On the site there would already be fortification with walls. The Moura Fence was built in the Late Roman period and was rebuilt and fortified during the period of the Christian Reconquest of the Iberian Peninsula after the conquest of Santarém, the forces of D. Afonso Henriques with the help of Norman, Flemish, German, and Englishmen who went to the Holy Land, invested against this Muslim fortification, which he capitulated after a siege of three months (1147). From the 13th century onwards, Lisbon became the capital of the kingdom (1255), and the castle was well known, when it was, in addition to the Royal Palace, the so-called Paço da Alcáçova, a palace of bishops, military.
The earthquakes that affected the city 3 times, caused him damages.
The change from the royal residence to the riverside area, the installation of barracks and the earthquake of 1755 contributed to the decline and degradation of the monument.
It was the headquarters of Casa Pia de and was used as Headquarters by Jean-Andoche Junot. It was thus, decharacterized and, in part, banned from Lisbon, it reached the twentieth century.
It was subject to great restoration works in 1940 and later in 1990. D. Afonso Henriques consecrated the Castle to S. Jorge for the victory in the conquest of Lisbon, reason to exist an image of S. Jorge next to the Arch of entrance in the Castle.
You can still see the Arms Square and the medieval remains of the former Governor’s House of the Castle garrison, even before entering the castle. Marvel at the views over the city and the river Tagus.
Just outside the gate, across the street from Chão da Feira, you will find wine and souvenir shops. There are terraces with menus in English and French, typical taverns and old grocery stores with fruit crates at the door.
The Terrace Castle apartment stands half-walled with these ramparts that overflow history and have resisted over time to natural disasters and battles.
Send feedback
History
Saved
Community 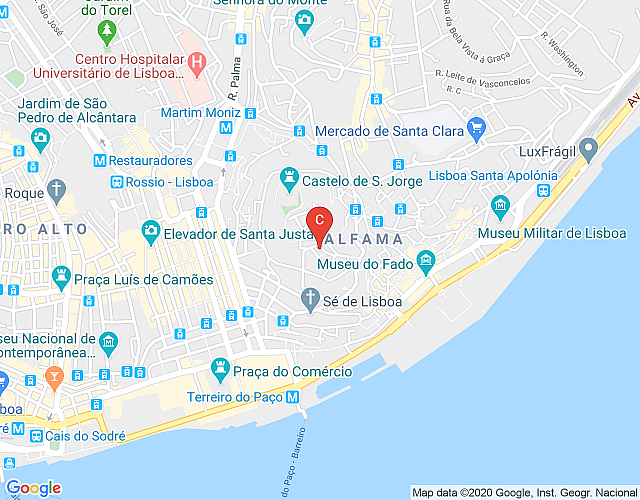