Equipped and prepared to host four people making it ideal for two couples, a group of friends or a family. The spacious kitchen has all the facilities and is fully equipped which makes it possible to elaborate a sophisticated meal or an outdoor drink and feel in the purest of environments, although it is in the heart of Lisbon. At Chiado Terrace you will find the best of both worlds: the cozy feeling of your home within a walking distance of the permanent buzz of this city.

Coming to Lisbon and not going to Chiado is like going to Rome and not seeing the Pope. In a phrase, Chiado is where the history and the urbanity of Lisbon meet. This tourist area of ​​the capital begins at the A Brasileira café, on Rua Garrett. Opened in 1905. This café is one of Lisbon’s ex-libris. In the esplanade you will find the most different urban tribes and a statue of Fernando Pessoa that offers the lap for the photographs of the tourists. Beside, two churches resemble the missing towers of the Porta de Santa Catarina. The Church of Loreto, built in 1528 by the Italians living in Portugal, was partially destroyed by the earthquake of 1755, but was later recovered and is one of the places to visit in Chiado. The church of the Incarnation, inaugurated in 1708, was also struck in 1755 and later retaken. But Chiado has more than two churches to see.
Praça Luís de Camões, which any Lisbon will call Largo Camões, is not only a place of passage. Sit on the steps of the monument to the poet and enjoy the life that Chiado has. But do not leave the Chiado without seeing the theaters. The Municipal Theater of São Luiz was one of the first cinemas in Lisbon. Today it is a municipal theater with a rich and varied program. Also take in the Teatro da Trindade and the opera in the Teatro S.Carlos.

This is one of the best areas of the city for shopping. You will find international brand stores (Hermès and Hugo Boss, for example) and Portuguese designers such as José António Tenente.

It will be normal to meet with public figures, especially artists. There are several schools of artistic training in this area, such as the Faculty of Fine Arts. Even if you are not an expert, visit the Chiado Museum – National Museum of Contemporary Art. Be careful with the movement of cars and trams in Chiado that is constant. Lisbon does not stop. 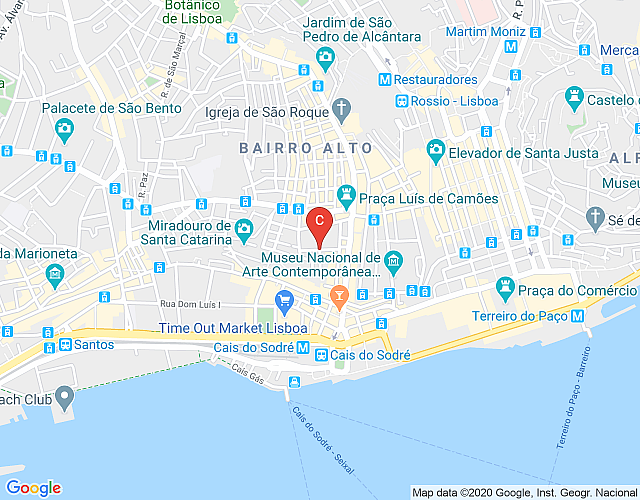